Skip to content
June 14, 2012 Borderlands of Health and Wellness

I recently came across an article at skeptophilia about the massage modality known as cupping and I wanted to share some common issues with massage modalities and bruising. The article is more interested in attacking the ideology behind cupping that says that not only does it draw blood and lymph to the surface but also energy. I don’t have a problem with that kind of criticism, especially when the critic is an avowed atheist, who is honest about his bias. But cupping as a modality is not the same as the sweedish massage technique known as cupping. Sweedish massage can be gentle or firm and is characterized by long gliding strokes. Cupping as a modality is performed with hard plastic or glass cups applied to the body that create a vacuum, pulling blood and lymph to the surface of the skin. it is usually done by a massage therapist but is not a technique that involves actual hands on manipulation of the tissues unless stated otherwise. Until today, I had no idea that Gwyneth Paltrow is credited with popularizing the cupping modality when she appeared in public in 2004 with six circular bruises on her body. But not all cupping is equal. Have a look at this monstrosity and if like me, you question its benefits, just know you aren’t alone. 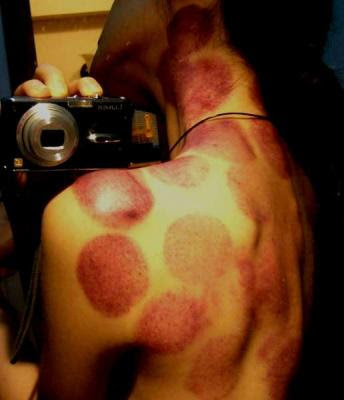 I don’t know about you, but that is extreme for my taste, and I am a massage therapist. When I was in massage school, training in deep tissue, the occasional bruise was not unheard of but I have never seen anything like the above picture demonstrates. My first thought is that the cups were left on the body for too long a period and that this is the result of negligence on the part of the therapist. I have had cups applied to me, and this was not the end result, although I did not receive a real treatment, just a taste of one.

But what about Deep Tissue? There is an entire school of thought among some therapists and massage aficionados that if you aren’t bruised after a deep tissue session then you didn’t get a good massage. My class mates and I were warned about this in massage school as something that occasionally happens but should not be the norm. Here is an example of what deep tissue fanatics are talking about.

Either way, this is not the kind of massage I recommend and I hope that anyone who is serious about living a healthy life would think twice before advocating this kind of treatment.

Published by Borderlands of Health and Wellness

14 Parsecs. No. 12. View all posts by Borderlands of Health and Wellness

My own path
Two Rooms Plus Utilities

Written from the heart, this is the unadulterated truth of life with multiple chronic illnesses and being housebound. My life open for you to follow. Please join me

one post a day of Lebanon through my eyes

The Big Mutt Blog
All In A Dad's Work

It’s about husbanding, daddying, and a dog.

a love letter to rome (visit romepix.com for portfolio)

About fantastical places and other stuff

Fall in Love with taking care of Yourself.

Ignite Your Creativity by Belinda Witzenhausen

...adding spark to your creative life!